Cruise the canals of the exciting city with this peaceful Amsterdam Boat Ride. A fun and enjoyable way to discover the capital of the Netherlands from a different point of view. 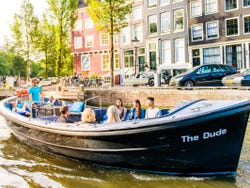 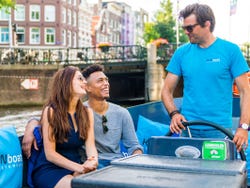 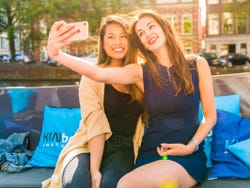 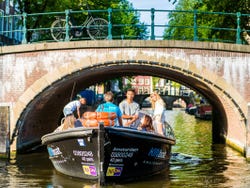 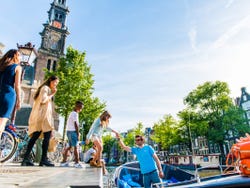 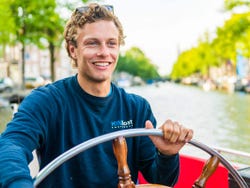 At a time of your choice, we'll set off from the quay of the Anne Frank House to explore Amsterdam's most popular canals. During this boat trip, we'll also sail along the Amstel River, passing through the most picturesque areas of the charming capital of the Netherlands.

From the boat, you'll see the old 17th century merchants' dwellings and the famous houseboats on the banks of the canals. During the crossing, we'll also have the opportunity to pass under several of Amsterdam's bridges and to see emblematic monuments such as the Oude Kerk from a different perspective. Did you know that this church is the oldest building in the city?

This route also takes you through the waters of Amsterdam's Red Light District. Most of the canals are off-limits to larger boats, but the boat we'll take you on this tour is the perfect way to explore this popular district. It's also a quiet and environmentally friendly boat.

From the Red Light District, we'll continue sailing around Amsterdam's harbour and St. Nicholas Basilica, whose neo-baroque towers are visible from a large part of the city.

After an hour's cruise along Amsterdam's canals, we'll conclude this boat trip by returning to the departure pier.

If you prefer, you can also book a canal cruise.

English speaking guide on board.

17% discount on the official ticket price.

US$ 20.40
US$ 17
No hidden fees or surcharges
Free cancellation up to 24 hours before the service starts
Book

9.10 / 10 35 reviews
On this tour, as well as getting to know the history of prostitution and drugs in Amsterdam, we will visit its oldest areas and its first street.
US$ 20.40
Book