Amsterdam’s Red Light District is located in the Old Town and is the most visited neighborhood of the capital, attracting thousands of curious tourists.

Prostitution is believed to be the world’s oldest profession. In the Middle Ages, the brothels in Amsterdam were administered by sheriffs and their trusted men.

In 1911, the Dutch government made this profession legal. Amsterdam is one of the thirteen Dutch towns with Red Light Districts.

Prostitutes rent one-cabin rooms with a window display and pay their taxes like any other working citizen living in Holland.

Strolling through the streets of the Red Light District is a must in Amsterdam. It is one of the most touristy areas of the city, and it is also packed with iconic landmarks like the eight-hundred-year-old Oude Kerk and the Amstelkring Museum.

Unlike other cities, Amsterdam’s Red Light District is normally full of people and quite safe; nevertheless, be careful of pickpockets. 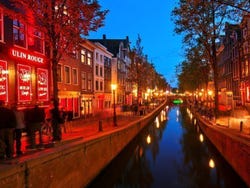 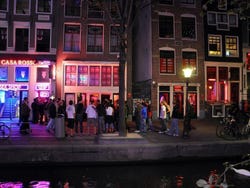