Official taxis in Amsterdam have a blue license place and a copy of the official rates inside and outside the taxi. The taxi license should always be placed on the dashboard. You'll need to bear in mind that, although there aren't many reports of this, there are still some illegal taxis in Amsterdam.

Some taxi drivers are considered “city experts” and have a special permit to drive on the bus lanes and tram tracks.

These taxis are faster than the rest and have a pink “Exemption Card” on the dashboard.

The taxi ranks are slightly different in Amsterdam; you do not take the first one but check the taxi’s tariffs and then choose the one you prefer.

If you don’t want to lose time comparing, we suggest you do what locals do and take a taxi belonging to the Taxi Centrale Amsterdam (TCA). 90% of the times, it is the cheapest option.

According to the latest figures, there are approximately 100 bike taxis in Amsterdam. These vehicles fit up to two passengers and are less expensive than the traditional taxis. 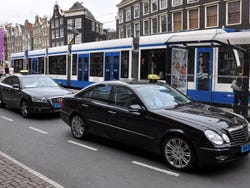 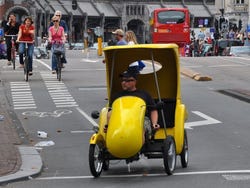