The De Hoge Veluwe National Park is one of the Netherlands' greatest natural treasures. Discover its incredible plants and wildlife on this trip from Amsterdam. 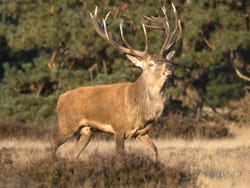 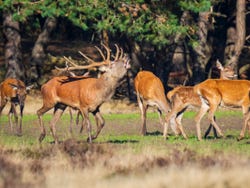 We'll meet at 8 am at De Ruijterkade Oost in Amsterdam and set off on a one-hour journey to one of the most beautiful natural areas in the Netherlands: the De Hoge Veluwe National Park.

We'll go on a guided tour of this magnificent environment, located in a large wooded area called the Veluwe. During the tour we'll see incredible creatures such as wild boar, deer, roe deer, mouflons, wolves, foxes, badgers, martens, snakes... As well as its wildlife, we'll also find out some interesting facts about the plants in the park. Hundreds of botanical species live together in this spectacular ecosystem!

After the tour of De Hoge Veluwe, you'll have two hours of free time to recharge your batteries. You can also go on a bike ride around the National Park in Dutch style.

At the end of the trip we'll return to the starting point for around 2 pm.

Within the De Hoge Veluwe National Park there are two museums: the Kröller-Müller Museum, which houses the second-largest collection of Van Gogh's works in the world, and the Jachthuis Sint Hubertus, a traditional country house designed by the renowned Dutch architect Hendrik Petrus Berlage.

If you'd prefer to visit one of the aforementioned museums instead of going on the tour of De Hoge Veluwe, we'll drop you off at no extra cost: you just have to let the driver know on the day of the tour. Entrance fees to these museums are not included.

All of our providers comply with local legislation and applicable health recommendations to avoid the spread of Covid-19.

The activity takes place with a guide that speaks in english and other languages.

Entry fee to the national park.

Optional entry to the Jachthuis Sint Hubertus museum: € 4 (US$ 4.70) per person.

US$ 112.70
No hidden fees or surcharges
Free cancellation up to 24 hours before the service starts
Book

9 / 10 895 reviews
What better way to immerse yourself in the history and culture of Amsterdam than with a guided tour led by an English speaking guide?
Free!
Book
like

8.40 / 10 879 reviews
A visit to Amsterdam is not complete without enjoying a cruise along its scenic canals. Discover the city’s most iconic landmarks from the water on a one hour open-top boat tour.
US$ 15.40
Book
like

9.30 / 10 717 reviews
Get to know Amsterdam through the story of Anne Frank, passing though the Jewish Quarter while discovering the relationship between the Dutch city and the Nazi Regime.
US$ 30.20
Book