Discover The Netherlands' contrasts between modernity and tradition with this Rotterdam, Delft and The Hague Tour. Step back in time to the 17th century while exploring the vibrant culture. 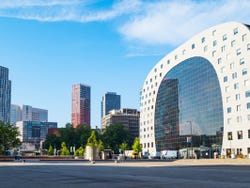 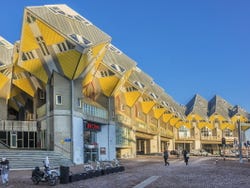 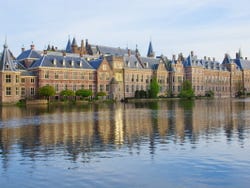 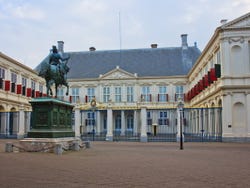 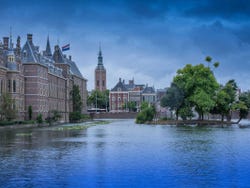 The tour will depart by bus at 9 am from Prins Hendrikkade 52, Amsterdam, and head to The Hague known as the country's administrative capital. We'll stop just before reaching the city at the Peace Palace to take photos of the spectacular building, which houses the International Court of Justice. Here you'll also see the Eternal Peace Flame at the entrance to the palace.

Then we'll continue on to the city centre, where we'll explore the former capital of The Netherlands and the government headquarters. Here we'll tour the streets around the historic centre and visit the Binnenhof, the Hofvijver, the Ridderzaal, the Noordinde Palace and the Buitenhoff. As we find out about the city's past, we'll also learn more about the Orange-Nassau family and other important figures including Vincent Van Gogh.

Next, we'll move onto Rotterdam, home to Dutch modernist architecture and urban innovation. Here you'll admire the impressive avant-garde buildings including the famous Cube Houses and the Erasmus bridge. You'll also have free time to enjoy lunch around the city.

Our final stop of the day will be the De Delftse Pauw Pottery Factory, where we'll learn about the origins of traditional Dutch pottery.

Bear in mind that we won't be visiting the city of Delft, only the pottery factory.

All of our providers comply with local legislation and applicable health recommendations to avoid the spread of Covid-19. Show more

Tours or activities will not consist of more than 10 people per group.

A safe distance of one metre between clients will be maintained whenever possible.

The use of masks is obligatory. The client must bring their own mask.

Alcohol gel will be available before, during, and after the service.

All those running the service (guide, driver etc...) will wear a mask throughout its duration.

Disinfected radio units will be provided, and headphones will be single-use.

Handing out of printed material such as maps or brochures will be avoided.

The temperature and wellness of all those taking part in the service will be monitored daily, excluding and maintaining in quarantine any who display fever or symptoms.

The transport used will be disinfected before and after each service and deep-cleaned every 24 hours.

Showing your voucher on your phone will be enough, and it is not necessary to print anything.

The activity takes place with a guide that speaks in english.

Walking tour of The Hague.

Visit to a pottery factory in Delft.

Visit to the city of Delft.

You can book up until 9 hours before the activity as long as there are still places. Book now to guarantee your spot.

US$ 69.90
No hidden fees or surcharges
Free cancellation up to 24 hours before the service starts
Book

9 / 10 895 reviews
What better way to immerse yourself in the history and culture of Amsterdam than with a guided tour led by an English speaking guide?
Free!
Book
like

8.40 / 10 879 reviews
A visit to Amsterdam is not complete without enjoying a cruise along its scenic canals. Discover the city’s most iconic landmarks from the water on a one hour open-top boat tour.
US$ 15.40
Book
like

9.50 / 10 4 reviews
Leave Amsterdam behind and step back in time as you head to the serene Dutch countryside for a taste of the real Volendam experience.
US$ 34.40
Book